MACC chief should not go after whistleblowers, says C4

C4 said the MACC is an agency tasked with protecting those who expose corruption and Azam should not threaten anyone with legal action.

“Azam’s attempts to silence her smacks of grave intimidation and fear tactics completely unbecoming of a top graft buster,” said C4 in a statement on Friday (Jan 7).

C4 also said the impending lawsuit against Lalitha would only deter any whistleblowers from exposing any wrongdoing in future.

“It is the cruelest irony that it is Azam, of all people, who should be assisting Lalitha to obtain whistleblower protection,” added C4.

Noting the weaknesses in present legislation, C4 said it had sought to amend the Whistleblower Protection Act 2010 (WPA 2010), as presently, individuals are only allowed to report graft to enforcement agencies and there is a condition that the disclosure cannot break existing laws.

C4 also said on Nov 17 last year, Azam had told the media that he fully supported amendments to WPA 2010 to better protect whistleblowers.

“Where is the support for whistleblowers now? Was this all mere lip service?

“The only right cause of action for Azam now is to immediately withdraw his LOD (letter of demand) and prove to the public that the MACC genuinely advocates for whistleblower protection,” said C4, adding that Azam should also publicly declare his assets.

C4 also called on Azam to go on leave as MACC chief commissioner until all investigations into the stock trading controversy are completed.

“Leading an anti-graft commission, Azam has by his actions so far terribly failed to lead by example and is sending the wrong message out,” added C4.

Among those who called on Azam to retract his LOD was also MCA, whose spokesperson Chan Quin Er said Lalitha was only doing her job by reporting public knowledge.

Noting that Azam would be summoned by the Securities Commission (EC), Chan said this was an opportunity for him to clear his name and quell any doubts among the public.

Chan also said that pursuing the letter of demand against Lalitha would only reflect poorly on Azam.

On Thursday (Jan 6), Azam said he would cooperate with the SC over the matter and expected to meet next week.

Speaking about the issue on Wednesday (Jan 5), Azam said his brother had used his trading account to buy shares in the open market and financed the purchases on his own.

It involved substantial amounts of shares bought from Gets Global Bhd and Excel Force MSC Bhd between 2015 and 2016 when Azam was the MACC director of investigations.

Azam said the same explanation was given to the MACC’s Anti-Corruption Advisory Board (ACAB) after he was summoned to explain the matter on Nov 24.

Azam also maintained that he did not commit any wrongdoing, adding that action will be taken against those who tarnish his reputation and that of the MACC. 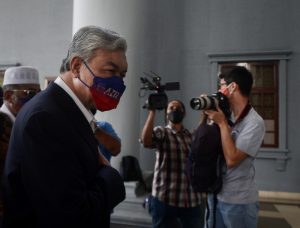