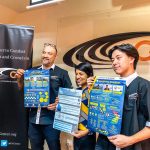 “This is extremely disappointing, as he could not have acted alone and was not even the key figure in orchestrating the massive scandal,” she said at a press conference.

BNS was tasked with building six navy frigates in the LCS project, which has come under parliamentary scrutiny over costs and delays in construction.

Cynthia cited the names of several individuals and shipbuilding companies whom she said were involved in several past corruption scandals in the country but were allegedly not investigated properly.

“We need to see key individuals connected to the scandals being investigated. And if there are hidden hands involved, they should not escape scrutiny,” she said.

She asked MACC to explain why it has not opened investigations into these individuals.

FMT is withholding the names of the individuals cited by C4 pending their comments.

C4’s research also found that individuals involved in the LCS scandal were allegedly linked to the Scorpene project, a bribery scandal arising from the procurement of submarines by the government from France in 2002.

“They used the same modus operandi of proxies and shell companies,” she said, adding that this complex network allowed corrupt individuals to benefit from the weaknesses in the country’s procurement system.

She said a special select committee must be established to scrutinise billion-ringgit defence procurement deals and draft recommendations for legislating the matter.

Citing the transnational nature of corruption, C4 also called for cooperation among the Malaysian, French and German governments to open investigations into firms involved in the LCS and Scorpene scandals.

“As signatories of the United Nations Convention Against Corruption (UNCAC), Malaysia, France and Germany must adhere to the framework of mutual legal assistance in the course of investigations as per Article 46 of the UNCAC,” it said.