The Center to Combat Corruption and Cronyism (C4 Center) laments Malaysia dropping a whopping six ranks to 57th place in the Corruption Perception Index (CPI) 2020, and is deeply troubled that this marks entrenched corruption seeping deeper into the institutions and administration that governs the country.

The release of the CPI today, revealed that Malaysia’s score fell two points from 2019, leading to a drop in six ranks. According to Transparency International, who released the report, the drop in score can be attributed to the sudden change in government following the Sheraton move early in 2020.

Influencing factors included stalled institutional reforms, limited access to information on matters of public interest, the continued abuse of power and corruption by enforcement agencies, and a lack of political will to fight institutional corruption which Is embedded in the system. This does not augur well for our future, given that the United Nations report on Trade and Development (UNCTAD) listed that Malaysia’s Foreign Direct Investment had plunged by 68%.

Other factors included the appointment of politicians to head GLCs, the lack of progress on the Whistleblower Protection Act and Government Procurement Bill, as well as continued adverse findings in the Auditor General’s annual report.

While the National Anti-Corruption Plan (NACP) was listed as a redeeming feature, scarce updates on the progress of the plan’s 115 initiatives leaves C4 Center with little confidence that this unelected government may have pushed it on the back burner or even looking its way for guidance, as it clings on to power ever so desperately.

The Perikatan Nasional government has decisively rolled back many initiatives that were started by the previous Pakatan Harapan government, not just in the NACP, but even to the extent of suspending elections and the function of Parliament, subverting the rule of law, a key pillar in upholding good governance.

A further example as pointed out by TIM was high profile politicians involving corruption charges being taken to court, but several acquittals, Discharges Not Amounting to Acquittal (DNAA), and a lack of information on such cases have had an adverse effect instead, and leading efforts on political governance and institutional reform leave much to be desired.

That these can mostly be traced to the new administration is a grave cause for concern, and C4 Center urges the public to call for the government to wake up and shake up, and move towards improved transparency, especially in narrowing the scope of the Official Secrets Act to only matters of national security, to provide updates and progress on the NACP, and to amend the Whistleblower Protection Act.

Otherwise, the NACP may as well be declared DEAD!

C4 Center urges PM Muhyiddin to take this as a serious call to rework his administration towards strengthening the independence of our institutions, as we prepare the country for a difficult time to restore faith in the economy, faith in the political system, and to restore the rule of law. 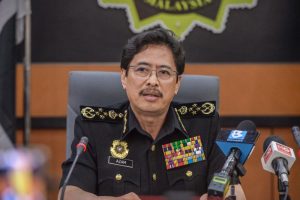