PETALING JAYA: An anti-graft watchdog and a media advocacy group have highlighted how the Covid-19 pandemic has made freedom of information all the more important.

Speaking to FMT in conjunction with today’s United Nations’ International Day for Universal Access to Information, the Center to Combat Corruption and Cronyism (C4) and the Centre for Independent Journalism (CIJ) both emphasised how the free flow of information was crucial to achieving accountability and transparency – and ultimately helping the public make informed decisions.

“In a time of crisis, many procedures get subverted in the name of the Emergency and a lack of check and balance. This is exactly how our rights get further snatched away from us,” said C4 executive director Cynthia Gabriel.

“If we had federal legislation on freedom of information, any individual can apply for information regarding vaccines, stimulus packages, understand better how large chunks of public funds are spent, and demand for greater accountability.”

She noted how Parliament did not sit for six months during the Emergency which ran from January to August, adding that several emergency ordinances approved during this period – especially on financial expenditure – raised a lot of concern as money was “flowing freely without any scrutiny”.

Cynthia also highlighted how the government had yet to explain the RM11.5 billion in loans registered on Bank Negara Malaysia’s website a few days before former prime minister Muhyiddin Yassin stepped down on Aug 16.

The BNM website showed billions of ringgit in bonds issued by the government with the central bank as the facility agent, with the three transactions labelled as Malaysian Islamic Treasury Bills, Malaysian Government Securities and Government Investment Issues.

“What was that about? We have asked for clarity but there has been none,” she said.

Meanwhile, CIJ’s Right to Information (RTI) programme officer Lee Shook Fong noted that since information held by public authorities is essentially public information, there has to be a shift away from a culture of secrecy to a more open and transparent government.

“(This) requires enacting a law that would create a more progressive information regime,” she said.

“In these challenging times, especially as we continue to battle the Covid-19 pandemic, having access to timely, credible and verifiable information would help the public be better informed about issues that affect them.

“In times of crisis, it is also crucial that the government adopts the measure of public disclosure of information as an effective tool to combat misinformation, as opposed to restricting the public’s access to important information.

“For example, we would want more information about why some vaccines work for some, but not for others. What is the government doing to ensure a more efficient vaccine rollout?”

She added that when the public is equipped with the right information, they would have better knowledge about an issue or situation – thus better positioning them to make informed decisions or calls for action regarding proposed policies, rules or infrastructure projects.

Lee said examples of this include providing communities with reasonable access to pertinent information such as environmental impact assessment (EIA) reports for proposed developments near their residential areas.

Cynthia also touched on how freedom of information is vital for communities looking to learn about environmental issues which affect them, taking the controversial Kuala Langat North Forest Reserve degazettement – and eventual regazettement after overwhelming public objection – as a key example.

Technical reports on the degazettement, outcome documents from the town hall session and requests for copies of the forestry department’s report on the forest reserve were never granted.

This was despite tens of thousands of Selangor residents having voiced their concern about the health and climate risks associated with the degazettement, and potential development, of the forest reserve.

And while the decision to degazette the forest reserve was made on May 5 by the Selangor state executive council, the public only found out about it nearly four months later on Aug 30 – when Selangor executive councillor Hee Loy Sian made the revelation at the state legislative assembly.

This was despite Selangor being one of only two states in the country which has freedom of information enactments, the other being Penang. However, federal laws such as the Official Secrets Act (OSA) stem the free flow of certain information by classifying it as official secrets – even in these two states which are under a Pakatan Harapan administration.

Then Selangor menteri besar Azmin Ali noted as much during his keynote closing address at a forum titled “Zooming in – an honest assessment of Freedom of Information (FoI) in Malaysia” in July 2016, when he said the “onerous” OSA represents the single greatest barrier to more transparency and accountability of the government to its citizens.

“In fact, as rightly pointed out, secrecy breeds corruption,” he said.

“But even worse, employed as a pretext for arbitrary executive action, secrecy via the law is used as a weapon of oppression.” 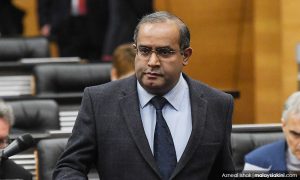