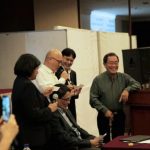 Work in progress for a few months are now a reality…a new hope and a headstart for many of us graftbusters , and a sure headache for the corrupt!

This is the long awaited moment ….friends and colleagues! All of us graftbusters gathered today! Can now welcome C4 into the fray with an explosive burst of applause!

Work in progress for a few months are now a reality…a new hope and a headstart for many of us graftbusters , and a sure headache for the corrupt!

We live in “kangkung times” times when our leaders mock at us, tell us to tighten our belts, gloss over our difficulties, while they continue abusing public money and living lavish lifestyles way beyond their means. Yes we are deeply frustrated and intensely angered at the daily dose of news of corruption in this country, of reports and stories of how our money has been manifestly mismanaged and how those in power have tried to silence us with threats, conflicts and clampdowns.

The mega scandals; PKFZ, SCORPENE, NFC…! No one has been found responsible by our courts of law. So who embezzlement the funds? Where are our public monies going to? Where are our institutions? Are they being allowed to function effectively? Surely not, as no one is responsible for PKFZ losses. We are talking about RM 12.5 billion of taxpayers money gone…And what about the procurement of 2 French submarines? What was that RM500 million paid for again? Judicial investigations are in progress in France but none in Malaysia – and then there is the NFC.. the whistleblower is facing a slew of charges in court! Nepotism and cronyism rules!

One thing is for certain! It’s always difficult to prove corruption, especially among the powerful elite. The powerful are also most able to enjoy impunity from their actions, by subverting investigations and prosecutions. Policing is most difficult when those under scrutiny have access to the highest levels of power and influence.

“To oppose corruption in government is the highest obligation of patriotism.”

There are pockets of wealth in this country. Mostly those pockets are in the politicians’ pants.

We have aspirations! We want a clean government! We want an accountable government! And yet we are terribly frustrated that we have no means of achieving any of these goals, so long as those in power remain there. But we are frustrated that our aspirations cannot be as long as those in power remain so. As Thomas Jefferson once said

“Experience has shown, that even under the best forms of government those entrusted with power have, in time, and by slow operations, perverted it into tyranny.”
― Thomas Jefferson

So how then do we mount an effective challenge against corruption among the powerful?

Our only weapon, our only ammunition is ourselves. We Malaysians..all of us must believe this important enough to take on as our own motivations. We need broad appeal in the fight against corruption. We cannot do this alone. We cannot just talk, and certainly cant just do this in Kuala Lumpur alone.

“Difficulties break some men but make others. It always seems impossible until it’s done.” NELSON MANDELA

We must make the battle against corruption especially in the public sector a battle of every Malaysian..It must be a turning point in our political and economic landscape. We need to take this message out to our friends and families in more rural settings. We need to tell those in power, in no uncertain terms that we will not tolerate corruption, any longer!

Look at India as an example. A brand new political party in the name of fighting corruption! The Common ManParty.. They are building mass appeal. They won the local elections and the Chief Ministers post convincingly. An uncommon success but one that is indeed possible. They have had thousands join them with mass donations even from India’s poorest communities, because they desire a clean government.

And so we gather here today because we represent a bigger cause, a bigger phenomenon. We want to promote citizenship politics, a participatory democracy, where there is greater transparency in decision making. The centre brings forth hope of an impartial independent voice that comes at a time when public perception of those in power are riding on real lows.

It is within this context that the Centre to Combat Corruption and Cronyism finds its inspiration. We stand for 4Cs – CLEAN, CONSCIOUS, COMPETENT & CREDIBLE, C4 aims to provide a comprehensive solution from preventive to corrective measures to bring about a transformation of mindset and practices against corruption. So lets us all work together and tell the government who’s the Real BOSS.

There is so much positive energy around the setting up of C4. I must name a few people who gave so much volunteered their time, their energy and put their skills to good use for a good cause..

Despite a general downtime post GE13, the infectious energy and tireless work of all the volunteers that’s given C4 hope. No ones got paid from doing any of this.. we can overcome these difficult times together. Lets fight corruption together!